FREE TRANSLATION IN ENGLISH OF THE ORIGINAL LETTER IN FRENCH

The head of Office

The Vice-President of the European Commission, Viviane Reding, has received

The report of the European Commission of 22 December 2010 on "The memory of crimes committed by totalitarian regimes in Europe '* highlights the diversity of laws of Member States in this area.

Member States have adopted measures different depending on their history and their national circumstances. Even among Member States which have suffered the same kind of totalitarian regime, instruments and measures selected may be very different.

Given this disparity and limited powers of the European Union in this area, the Commission considers that the conditions for action legislate in those areas does not currently exist.

In its report, the European Commission also stresses the importance for the Union and contributes, within its competence, to promote the memory of the crimes committed by totalitarian regimes in Europe.

The European Commission considers that important gaps in knowledge of the totalitarian past of all Member States, notably as regards the period during which Europe's Western and Eastern Europe has experienced two different experiments.

Free translation in English of the original letter in French

The head of Office

On behalf of the Vice-President, Mrs. Viviane Reding, I thank you for your letter dated 25 February 2011 in response to my letter of 22 February 2011.

In your letter you are referring to the importance of the Holocaust.

I can only share your opinion on this point and remind you that the report of the European Commission on December 22, 2010 "The memory of the crimes committed by totalitarian regimes in Europe " clearly expresses the will of the European Commission to utilize its financial programs to help any interested parties to safeguard and promote the memory of the crimes committed by the totalitarian regimes, including crimes of Nazism.

Among these programs, the first report of the European Commission says the program "Europe for the Citizens” which includes the Action 4" An active European memory ", aims to maintain the memory of victims of Nazism and of Stalinism and improve the knowledge of what happened in the camps and other mass murder sites of civilians.

This action supports projects to preserve the main sites and memorials associated with the mass deportations of civilians, the former concentration camps and other sites of martyrdom and of large-scale extermination of Nazism, as well as the archives relating to these events, and maintain the memory of the victims, and also the remembrance of those who in these extreme conditions, rescued people from the Holocaust.

from the Chief of Staff of Viviane Reding

We have started to exchange letters with Viviane Reding, Vice President of the European commission and her Chief of Staff Martin Selmayr regarding our opposition in the name of the European Values, to the dangerous tendency to consider that the former Communist Regimes committed crime equivalent to those of Nazism and thus questioning the Uniqueness of the Holocaust.

We have noted in your last letter that European Union has allocated resources to finance programs safeguarding the memory of the crimes committed by totalitarian regimes including Nazism. We thus understand that Nazism is now considered as a totalitarian regime among others and has lost its usual specificity of symbol of the highest degree of horror reached in our civilized word.

We think that this new approach of Nazism is an unfortunate consequence of the Prague Declaration of 3 June 2008 whose target was to report the horror of the crimes of the communist regimes. As a matter of fact this declaration has also reclassified the crimes of Nazism by ranking them equal to those of the Communist regimes. In our opinion this comparative statement was not the target of the signatories and has now adverse consequences.

It opens the door to Historical revisionism and strengthened the conviction of six countries to modify accordingly their “Criminal” laws: Lithuania, Latvia, Bulgaria, Hungary, Romania and the Czech Republic. It must be noted that Lithuania and Hungary have already promulgated criminal laws in this field including imprisonment of 2 and 3 years respectively.

This comparative initiative is in our opinion unethical and questions half a century of judicial proceedings and trials against Nazi criminals, starting with the trial of Nuremberg.

As a result the crimes of Nazism seem alleviated since they are embedded among others. The uniqueness of Nazism and of its creation “the Holocaust” is a reference absolutely needed to designate the highest point of Barbary for all peoples “as it was until now.”

The uniqueness of Nazism and of Holocaust may be understood easily by the fact that 63% of the European Jews were destroyed “mainly” from 1942 after the Wannsee conference until 1945 and even from 1941 regarding Lithuania.

Any questioning of the uniqueness of Nazism and Holocaust is in our opinion an anti-Semitic act.

We may also notice that the trivialization of Nazism has eased the rebirth of Nazism in Lithuania. This is particularly shocking since Lithuania saw the highest percentage (96%) of eradication of the Jewish people and since many citizens of this country had participated to the Holocaust.

Nazism is not only a simple authoritarian ideology, but has created and achieved the concept of the mass extermination. The representation of human skulls as the ornaments on the SS uniforms is meaningful. Today the Nazis parade in the streets of Vilnius and display the same SS symbols of death.

The uniqueness of “the Holocaust” has probably allowed a reduction of anti-Semitism in Europe without great merit since the remaining Jewish population in Europe became negligible today as compared to 1939 (12% as compared to 60% of the Jewish population in 1939). Questioning this uniqueness opens the doors of Intolerance in opposition to the values promoted by the European Union.

We think that Europe as a whole has a particular duty regarding the memory of the Holocaust; as a matter of fact Europe did not listen to Gustav Stresemann and Aristide Briand who both received the Nobel Peace Prizes in 1926 and by its procrastination had indirectly paved the way of Nazism.

In addition, in the Eastern part of Europe where most of the Jewish population lived before its eradication, the Holocaust had begun before the arrival of German troops and continued briefly after their defeat as a result of the slaughters made by the local populations.

Nazism is so different from other totalitarian regimes that Europe owes its today freedom to the gigantic sacrifice of 21 million of civilians and soldiers killed by the Nazis and who were all citizens of USSR.

We would like to stress again that today the Nazis legally march on the main avenues of Vilnius on Independence Day displaying the Swastika, which was duly legalized in 2010 as a national symbol.

Lithuania has recently enacted a law prohibiting the display of Communist and Nazi Symbols but has thus cancelled the part concerning Nazism. The Museum of Genocide in this country excludes the Holocaust and as a result contravenes the European rules. In addition it must be noted that Lithuania has never accepted to judge the war criminals expelled from USA after the communist era.

We must note that this totalitarian attitude contravenes the Charter of Fundamental Rights of the European Union, which can be legally enforced as the result of the treaty of Lisbon of 2009.

In Hungary the left side Government voted a law prohibiting the denial of Holocaust on 23 February 2010, which was dismantled on 8 June 2010 by the new elected rightist and authoritarian government of Viktor ORBAN. In a new law the word Holocaust was deleted and replaced by the word genocides committed by the communists and the Nazis. In Hungary 74% of the 596 000 Jews was exterminated principally from 1944 to 1945. Hungary as Lithuania cannot mention in no way anything similar which might be called genocide. We must also note the significant Hungarian participation to the extermination of Jews.

We thus do think that the European commission has the necessary legal tools to request the cancellation of the laws criminalizing those who disagree with the equivalence between Communism and the regrettable consequences of these laws.

We will make simultaneously efforts to obtain declarations regarding the crimes of the communist regimes without adverse comparative statement. 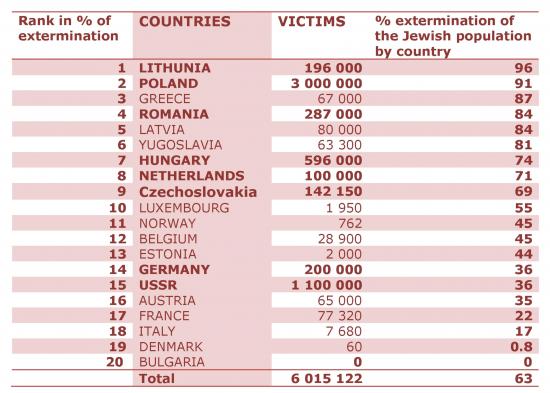 NUMBERS OF VICTIMS OF WWII