DESECRATION OF PONAR MONUMENT OVER THE LAST WEEK END

100,000 people out of which 70 000 Polish and Lithuanian Jews were slaughtered near the railways station of the city of Ponar by SS and their Lithuanian collaborators from July 1941 to August 1944.

Ponar was then in Poland during and is today in Lithuania.

As we have already mentioned it several times we notice a substantial resurgence of Anti-Semitism and Nazism in Lithuania; this country encourages other European Eastern countries to follow the same bad thread and make pressure on European authorities to adopt a revised version of History detrimental to the memory of the Holocaust. The Prague process is a booster of this increasing deleterious atmosphere.

From last 9 to 10 July, the monument dedicated to the victims of Ponar was it was covered with a Swastika and the sentence Hitler was right was written in Russian.

In their sick mind the Lithuanian far Right assimilates their hatred for Russians and Jews in this way. 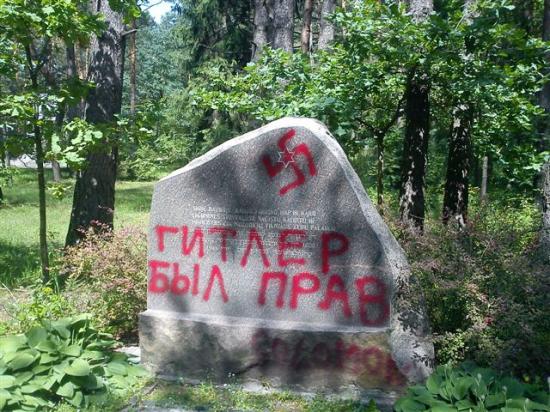