19 of the 27 members are small states with populations below 11 million. The 8 most populous states represent 78% of the population of the European Union and are in ascending order, Netherlands, Romania, Poland, Spain, Italy, UK, France and Germany. Nearly two thirds of EU's population is composed by 6 of the richest states.

Equality and dispersion of income

5 of the richest countries in Europe have a relatively egalitarian policy, with very low income dispersion between 0.23 and 0.27, which should inspire others the other U.E.’s members: These countries are Sweden, Denmark, Luxembourg, Austria and Germany.

-Ireland and the UK, probably because of their taste for liberal economy,

-Greece, Italy and Spain, probably because of their social traditions correlated with low industrialization and small size of most businesses,

-France probably because of tax system in favor of privileged castes and because of a gap between a pretended social policy and that actually applied.

With the exception of France, the EU population is aging with a very low averaged fertility rate of 1.5, which raises fundamental issues. Only two countries whose population represents more than 1% that of UE are combining a positive population growth and median age below 40 years: France and Portugal.

Delaying the retirement age in European Union is an adaptation to the economic crisis and its demographic consequence that does not respond satisfactorily to the treatment of the roots of this situation.

The average life in poor health is similar, about 19 years, in 7 of the poorest countries and in the 14 richest of EU, but it represents a larger share of the total life in the poor countries where life is shorter.

Life in poor health is particularly important in Austria, Germany, Finland, Portugal, Bulgaria and the Baltic countries since it is in excess 20 years for non related reasons. These reasons are partly due to inadequacies of the health system for the poorest members and a fragile life extension for the richest.

We can distinguish three groups of countries:

6 highly advanced countries with spending of at least 6% of GDP:

C-11 countries below the European standards with spending less than 5% of the GDP:

We see that education is still in the realm of political far from economic contingencies. Countries that promote equality whatever is the label of their governments often promote education. Central European countries that have limited economic development maintain a satisfactory cultural tradition. France and Germany are not in the rank where they could have been expected. Surprisingly 7 of the 11 unsatisfactory countries in this respect belong to the EU-15.

Among other debt may be also linked to the resources that the state allows itself by its organization and philosophy and the priorities set by itself (e.g. role international scene, Defense...). All states are not getting the same credit facilities and thus less developed states of the EU have a limited debt. We will see the countries of the former EU-15 and we may distinguish three groups:

1-Only five countries have debt less than or equal to 50% of GDP: Luxembourg, Sweden, Denmark, Finland and Spain, which did not make Spain immune to a serious crisis.

2-Four countries have a debt equal or greater than GDP: Portugal, Italy, Greece and Belgium.

3-The other 6 countries have a public debt of around 70% of GDP: Ireland, Austria, Netherlands, United Kingdom, Germany and France (79.7%).

France has high debt but still within the limits of the public debt of European countries, the most important being the applications of resources from debt.
The interest to examine the debt in a social report is due to the fact that debt is used by some states as an argument to restrict their  effort of social spending, then it is again most often a question of philosophy than facts.

We will see in a coming analysis that inequality may generate a substantial accumulated public debt.

NB:The sudden need of public debt of Ireland is due to the inconsistency of its Banks involving a high rescue effort and not to its social policy – This should be an alert for other countries 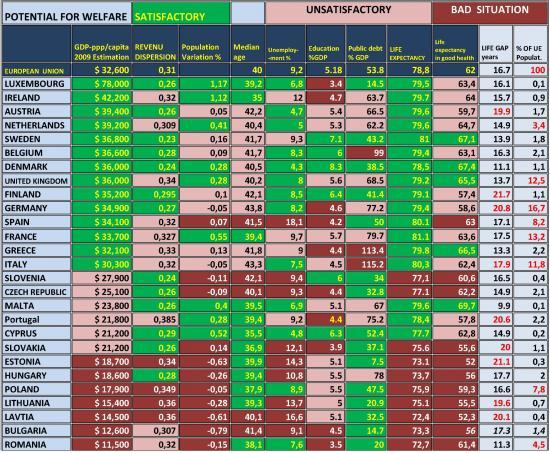