In 1922, the USSR had first united the republics of Georgia, Armenia and Azerbaijan within the Republic of Transcaucasia, and then had practiced an ethnic division between Armenians and Azeris by which Nagorno Karabakh whose population was 95% Armenian had to be part of Armenia. The Azeris had claimed and obtained this territory for geographical reasons but above all because an anti-Soviet uprising had occurred in Yerevan, the capital of Armenia. 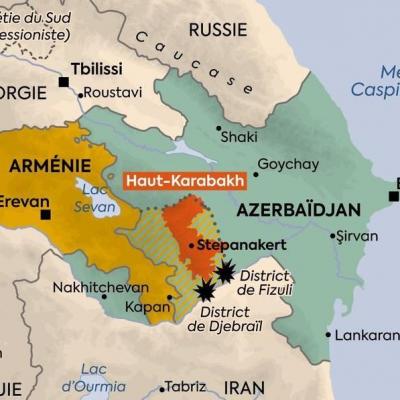 It is an exclave of Azerbaijan, landlocked between Iran and Armenia and suffering from isolation comparable to that of Nagorno-Karabakh. In fact, the border with Iran is with West Azerbaijan integrated with Iran. The integrity of Nakhichevan would benefit from a dangerous guarantee from Turkey, which shares only 9 km of border with it.

The Turkish and Azeri languages ??are intelligible to each other and Turkey was in the past a secular state like Azerbaijan. Turkey having tipped into the camp of Islamist fanaticism Turkey's support for Azerbaijan can have only deleterious consequences for Armenia and Azerbaijan. Turkey may be tempted to stir up conflict with Armenia as a Christian state and to encourage Azeri revival with Islam.

The distance between Nakhichevan and Azerbaijan is at most of the order of 50 km and the idea of ??a thin corridor in the south of Armenia following the Iranian border would stabilize the region provided that Azerbaijan accepts a similar corridor between Armenia and Nagorno-Karabakh.

Such an agreement would be advantageous for Azerbaijan because if the areas are equal, the Azeri population of Nakhichevan is approximately three times more important than the Armenian population of Nagorno-Karabakh.

This territory is naturally Armenian with a population of 95% Armenian. Armenia entered into conflict with Azerbaijan from 1988 to 1994, and fighting escalated from 1992 to 1994 following the breakup of the USSR. Armenia was then too largely victorious by taking control of Nagorno-Karabakh and the wide Latchin corridor which unifies it to Nagorno-Karabakh and by making a slight advance eastward into Azeri territory.

Thus the territories of Nagorno-Karabakh of 4,400 km2, that of the Latchin corridor and the Armenian advance to the east represent 11,400 km2 and the whole has proclaimed itself the Artsakh Republic. The conflict involved ethnic displacements (400,000 Armenians and 800,000 Azeris). In September 2020 the conflict resumed Azerbaijan wishing to regain the territory conquered by Armenia.

Russia maintains relations with Armenia and Azerbaijan and is in favor of a negotiated solution unlike Islamist Turkey.

Turkey has become, like Iran, a destabilizing entity in the Middle East, which logically no longer has its place in NATO. The United States has two military bases in Turkey, including that of Incirlik, where fifty B61 gravity nuclear bombs are stored and which would have to be moved out for international security reasons. The disappearances of the USSR and the territory of the Islamic State should allow the relocation of American bases to countries more surely linked to NATO.

Turkey, with a population of 83 million, has an army with a bloated strength of 560,000 soldiers, but its equipment is obsolete or would be local reproductions of obsolete foreign equipment produced by a very large but unsophisticated military industry.

The best Turkish air fighters are F16s (designed from the 1970s) and partly produced on site under the control of Lockheed Martin. The risk represented by Turkey does not allow it to benefit from the delivery of the most recent American F35 aircrafts.

The F35 benefit from a degree of stealth but only equip the closest allies of the United States, including Israel. The range of action of the F35 is shorter than that of the F16 but this is more than compensated by its increased efficiency. Moreover, the Turks recently made a clear hostile gesture towards NATO by acquiring Russian anti-aircraft equipment.

Traditionally, the role of the Turkish Army was to ensure respect for the principles of Kemalist secularism that Erdogan's Islamist AKP could no longer accept. The AKP therefore purged the Turkish Army of its elites and further reduced its effectiveness. The Turkish Army, despite its high number of soldiers remains only a regional power and can only play a role limited to local theaters of operations, avoiding facing the Great Powers.

Turkey's GDP in purchasing power parity would be $ 2.3 trillion in 2018 with a strong dependence on foreign investments sensitive to its stability: 13th overall and 55th rank per capita (26,450 dollars per person in parity of purchasing power). Turkey's dependence on foreign countries for strategic products makes significant the nominal figures established according to the effective exchange rate. Turkey's GDP then ranks 19th with 766 billion dollars in 2018 (3.6 times lower than that of France) and ranks 73rd. GDP in nominal value per capita is 9,340 dollars which is similar in value to that of Lebanon. . Turkey has therefore not militarily and economically the size that would justify the arrogance of its president and can only fuel regional and community conflicts.

The two belligerents occupy territories, parts of which are landlocked and which only represent a portion of their original territories.

Armenia is a mountainous country with no access to the sea surrounded by Georgia, Turkey, Iran, and Azerbaijan. Armenia is now reduced to an area of ??30,000 km2 with a population of 3 million. Armenia's 2017 GDP at purchasing power parity was in the order of $ 28 billion or $ 9,300 per capita. By an agreement of August 2010 its borders are protected by Russia, which can play a key role in the negotiations between Armenia and Azerbaijan.

Azerbaijan has common borders with Russia (Dagestan), Georgia, Armenia, and Iran. The Azeri exclave of Nakhichevan shares a 9 km border with Turkey.

Azerbaijan has 700km of coastline on the Caspian Sea which does not give it access to other seas but to significant oil fields.

Azerbaijan was integrated into the USSR in 1922 and became a Soviet Republic in 1937. A violent clash took place between the Azeris and the Soviet army and in 1990. Azerbaijan declared its independence on August 30, 1991 following the collapse of the USSR.

Azerbaijan was in 2018 the 23rd largest producer and 19th exporter of oil in the world. The GDP of Azerbaijan at purchasing power parity in 2017 amounted to approximately $ 172 billion or $ 17,000 per capita. Azerbaijan is therefore a much more important power than Armenia considering its population and its GDP 6 times greater than that of Armenia.

The resilience of Armenia is due to the determination of its people and to the support of its diaspora and of Russia. Azeri forces now appear to dominate on the ground, but a military victory would not ultimately be satisfactory for the two belligerents. Both Armenia and Azerbaijan may feel that they have inherited only a limited part of their national territories and this makes them reluctant to cede ground.

THE SIMULTANEOUS OPENING UP OF NAKHITCHEVAN AND NAGORNO-KARABAKH

A thin corridor in the south of Armenia would open up Nakhichevan and eliminate the very risky support of Turkey to secure the borders of Nakhichevan.

This double opening up would be a victory for both camps and could possibly end the conflict. Azerbaijan’s recapture of Artsakh would not be a real victory for Azerbaijan if Nakhichevan remained landlocked with its 500,000 inhabitants.

VII-RELATIONSHIP BETWEEN ISRAEL AND AZERBAIJAN

Although Israel is the privileged ally of the United States, its relations remain close with Russia and a number of former Soviet republics. A significant part of the Israeli population comes from Russia and these republics. After Hebrew and English, the Russian language is present everywhere in Israel: radios, newspapers, televisions, cinemas, shops and a secular political party has been founded with the support of Russian-speaking Israelis. Azerbaijan is a secular country where Russian is widely practiced after Azeri and its secularism made possible the development of relations with Israel.

Israel has become an important supplier, investor and customer of Azerbaijan in the field of telecommunications, energy and military equipment. Israel is Azerbaijan's largest arms supplier and imported 40% of its gas requirements in 2018.

As reciprocity the Israeli military air force can train in Azeri airspace near Iran. Azerbaijan shares a long border with Iran (actually Iranian Azerbaijan) and Baku is only 780 km from Tehran by road or 544 km by plane. Israel can thus exert close pressure on Iran which benefits all countries living under the threat of Iran.

The relations between Turkey and Israel were stopped but the isolation of Turkey by the NATO countries would be favorable to Armenia and Greece which supports Armenia and part of the Greek national waters are threatened by Turkey because of oil deposits.

In addition, nothing morally justifies Israel’s hesitation in recognizing the genocide suffered by the Armenians and which does not call into question “the uniqueness of the Holocaust.”