Victory of ethnicism and defeat of reason

We have found it convenient to define a syndrome illustrated by the history of the city of Shusha that could serve as a benchmark. For centuries Shusha has been part of the Armenian heritage but since the 19th century the city has constantly suffered from inter-ethnic conflicts. These conflicts were not resolved by the Paris Peace Conference of 1919 and 1920, which had nevertheless acknowledged the Republics of Georgia, Armenia and Azerbaijan. The city was sparsely inhabited until 1850 when it was populated equally by Armenians and Azeris. In 1919 a massacre of Armenians led to reprisals against the Azeris which in turn led to a pogrom against the Armenians in March 1920 and to their expulsion from the city. Finally the Azeris also fled the city which had only 5,000 inhabitants in 1926 as compared to nearly 44,000 in 1916. The city was slowly repopulated by Azeris and counted nearly 15,000 inhabitants in 1989 after another expulsion of the few Armenians still living there. In May 1992 the Armenians took over the city and drove out the Azeris and the city had only about 4,000 Armenian inhabitants until 2020. In November 2020 the Azeris took over the city and the Armenians have to flee. These dreadful cycles characterize the whole region dominated by ethnicism and deserted by reason.

II-State of mind of the belligerents

The state of mind of the belligerents is marked by a History dominated by massacres, displacement of populations, the questioning of their territories and the fact of having had to comply with the rules imposed by other states. These facts generate bitterness and a vengeful spirit which do not predispose the belligerents to negotiate peace, as we have seen. The tiny territory of Nagorno-Karabakh alone concentrates this firmly anchored state of mind. Unfortunately, Nagorno Karabakh is no longer just a territory but a challenge for each of the belligerents.

Victims of a genocide perpetrated by the Turks, the Armenians have been driven out from most of their territory. The Turks seem to have an inclination for invasion exemplified by the relatively recent fall of Constantinople on May 29, 1453 and by the wiping out of the Greek and Byzantine civilizations in Asia Minor. Many aspects of Islam do not mix well with Indo-European values, as the Turkish AKP’s transformation of Saint Sophia Cathedral into a mosque again in 2020 underlines.

The mountainous character of the region should not be a problem for a crossing point given the current capacity to build complex structures. The harmonious development of an economy and free movement over the whole of a national territory should only require a road and rail connection.

The large conquest of Azeri territories outside that of Nagorno-Karabakh could only trigger a reaction from the Azeris to retake these territories (Shusha syndrome). The Azeri army had no difficulty in doing so in November 2020 and even conquered the city of Shusha in Nagorno-Karabakh with of course displacement of populations. 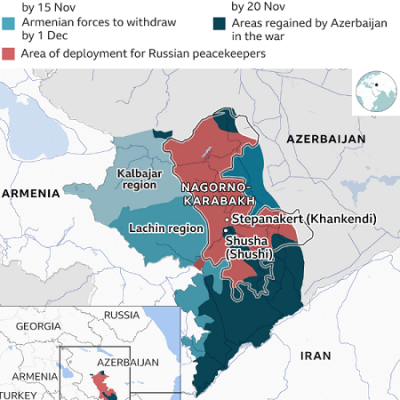 Azerbaijan is not Turkey; it is a secular state which, like Armenia, has kept close ties with Russia while choosing the western side when Turkey follows the opposite path. Azerbaijan maintains close relations with the United States and Israel.

While Nagorno Karabakh has a small area and 150,000 Armenian inhabitants, Nakhichevan with the same area has an Azeri population of 500,000 and is part of Azerbaijan while it is landlocked between Armenia and Iran (in fact Iranian Azerbaijan). The opening up of Nakhichevan should be "logically" a more important concern for Azerbaijan than the territory of Nagorno-Karabakh which has virtually no Azeri population. The city of Nakhichevan was once the capital of the great Azerbaijan. The economic development of this Azeri region and free movement would be facilitated by a road and rail link with the rest of Azerbaijan passing close of the border of Armenia and Iran.

The simultaneous openings up of Nakhichevan and Nagorno-Karabakh would be a positive element for Armenia and Azerbaijan. To make it possible, the territory of Nagorno-Karabakh must at the same time become independent de Jure and not only de facto.

III - Azeri territory and strengthening of Israel's position in the region.

For many years Azerbaijan's attention has been focused on Nagorno-Karabakh whose area is only ??4,400 km2. Logically, Azerbaijan should give more emphasis to 100,000 km2 of Azerbaijan controlled by Iran and which is also called South Azerbaijan when much more of 15,000,000 Azeris live there under Iranian rule.

This large Azeri population in Iran is a weakness point of Iran which seeks to destabilize the entire region. Iran acknowledges this fragility and has strengthened its armed positions on the border with Azerbaijan. This problem for Iran comes on top of that of Israel's alliances with Azerbaijan in the north of Iran and with the Emirates and Bahrain in the south which could be joined by Saudi Arabia.

Even from the regrettable Realpolitik point of view, Israel can no longer refrain from taking a stand against the genocide suffered by the Armenian people and whose history has similarities to that of the Jewish people. The genocide was perpetrated by Turkey, which has now become a fanatical Islamist country that is no longer of interest to Israel. The recognition of the genocide of the Armenians does not call into question the uniqueness of the Holocaust.